In a digitally driven world that's growing faster each and every day, innovation is unavoidable and vital to stay ahead of consumer expectation and demands.

This month, Coca-Cola introduced a Quick Reorder facility, taking advantage of the growing use of QR Codes to add value and ease to their consumer experience by simply using a phone to scan a code.

Although the Coca Cola option is super innovative, the consumer can only re-order the product through the supermarket of their choice. This adds time and some friction to the process of reordering. 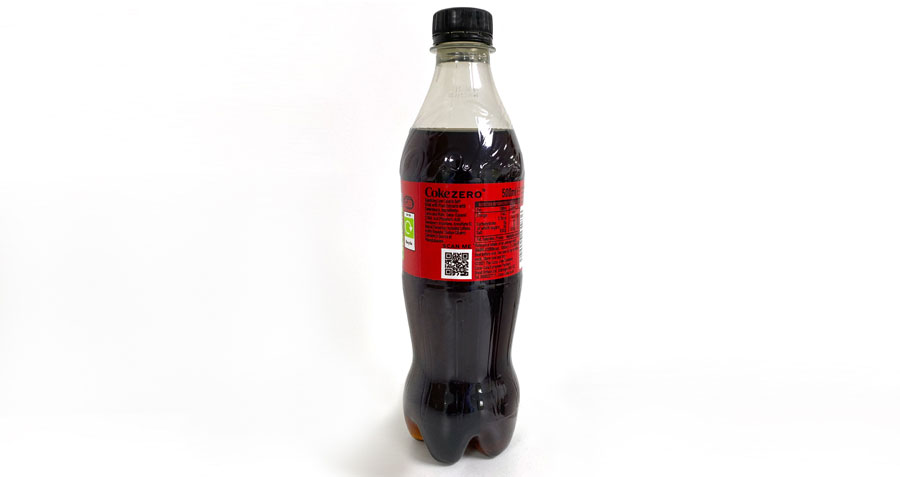 The Evidence: Our world is changing far faster than anyone could have expected, and there's nothing that's changing it more than the internet. Instantaneous, wonderfully convenient, ever-present. The modern internet is a marvel, and it's changing even the smallest parts of our lives; parts we never knew we needed changing - like shopping.
Who would have thought that we'd be able to access whatever product, wherever we are, from all corners of globe? The convenience of click click buy is made more appealing thanks to the experiences our favourite marketplaces give us, and there's no better or further-reaching vehicle for these experiences than a smartphone; a vehicle with an uptake far greater than many of us imagine.

The increasing space the Smartphone is taking in all our lives!

Not long ago, the shelves and walls of telephone stores were stocked with what we now consider relics. The Nokia 33-10, the Motorola Razer, the Blackberry Bold - all incredible devices that carried us into an era of what looked like boundless, blazing connectivity… but as we neared the end of a decade, a challenger crept out from the Silicon Valley shadows and rewrote the rule book in months. The iPhone was an overnight success, and suddenly, we were posting updates on trains, angry birding on planes, and purchasing last-minute gifts in a pinch - all from the palms of our hands.

The iPhone sent an industry into overdrive and made smart, touch display devices the consumer favourite. Almost a decade and a half later, 84% of British adults own a smartphone, and whilst that statistic might not be surprising, the stats for those who use one to get online are. As of 2020, 53% of people over the age of 65 access the internet through a smartphone; an astounding progression from just 2% in 2010. Between the ages of 55 and 64, as much as 77%!

You can imagine the impact our phones have made on e-commerce, but in numbers, 2021 will see 54% of e-commerce purchases made through a smartphone.  Brands spent $58.5 Billion last year on online e-commerce advertising to account for continual growth, but as more of us get online, you can't help but feel overwhelmed by choice. Information overload is an increasing issue in advertising, but in the midst of it all, some brands are fighting back.

Digital fatigue is a real issue.

Swiping, scrolling, and endless searching. Our devices are integral to our day-to-day lives, and whilst they've undoubtedly enabled so much for so many, there's plenty to be said about the downsides - including information overload. We experience information overload all the time, but in today's society, it's at its most prominent with social media advertising.

3.6 billion of us across the globe use social media platforms and spend an average of 145 minutes on them every day, so for those looking to advertise, there's seemingly no better way to do so. You've got the eyes, you've got the attention, you've got the ability to target right down to a tee and place your ads among content that your consumers really enjoy! But, the reality is, we're consuming more ads today than ever before and taking in far less information than many realise.

Take a look back at your day and try to count all the ads you remember seeing. They could have been on social media, in a magazine, on a news website - anywhere!  Now, take a guess on how many ads the average person sees in a day. In the 1970s, that figure would have been around 500, which even now may seem like a lot! But today, it's estimated that the average person will encounter 6,000 to 10,000 ads from the moment they wake up to the moment they go to bed. Simply, we are not built to process that much information, and as many as 42.7% of internet users agree by using ad blocking tools to turn the volume down on these noisy spaces.

Our love for being online won't be going away anytime soon, but it's clear that what we may think is the obvious approach to advertising is actually counterproductive. However, there is a way to cut through the noise, and in the last year, it's taken our lives by storm.

Technology can do so much for us, and yet, there’s still so much it isn't doing. In Click Click Buy, we like to think that anything is a click away, but some of the products and services that matter the most are unattainable. Luckily, the landscape is changing, and Precision Queue are playing a part in it.

Consumers love simplicity, and click click buy does it with its eyes shut! It’s a shame that simplicity doesn’t always extend itself to the healthcare industry, but some are making the change, including us!

As consumers, we take so strongly to click click buy for many reasons. One of the most important reasons lies in the name - 3 steps, and whatever you want is yours. It’s a process that whisks us past any distraction to secure the all-important purchase, taking us directly to the good stuff and nothing in between.

So, however you decide to integrate click click buy into your strategy, the execution is essential to give consumers as little friction as possible. So long as you have the time and money, a good web development team could create a 3-step solution for you, but click click buy’s popularity is always on the up, and we decided to respond.

Precision Queue is click click buy on the nail, created specifically for facilitating purchases in a few simple steps. It’s the same solution we use to sell Klear-vol, you can try it now using the Klear-vol Bear’s QR! 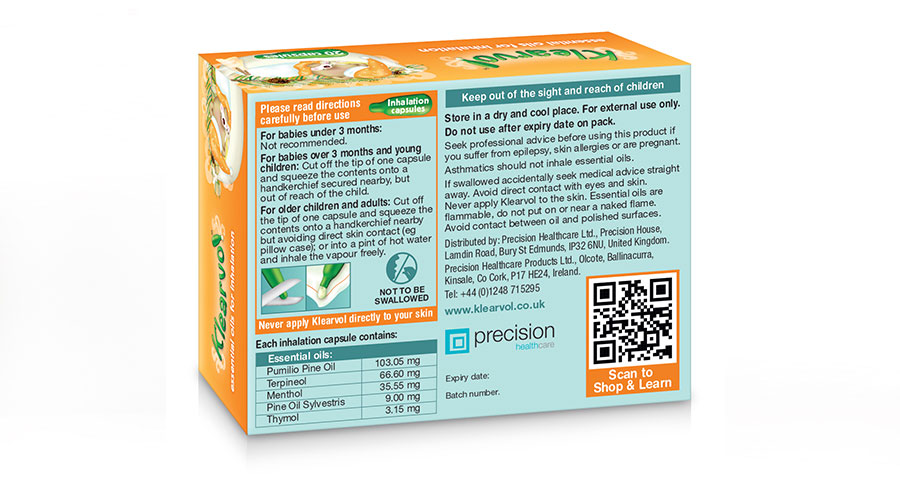 A good click click buy solution gives the essential information only, and by doing so, ensures that a consumer stays focused on the end goal; the purchase. As you can see on-screen, Precision Queue does exactly that, and after the information is displayed, we’re already at the checkout.

Click click buy benefits massively from fast payment options like Apple Pay and Google Pay, which can be integrated into any solution that uses a good payment facilitator, like Stripe. Apple Pay and Google Pay, just like a card machine, charges a very small amount per transaction, but it’s a minimal sacrifice to make the checkout considerably easier for your consumer. As well as the fast payment options, Stripe also ensures that your consumer’s payment info is kept secure and safe from third parties. Once the payment has gone through on Precision Queue, that’s it! You’re done, and you’ll receive an email to confirm you purchase afterwards. 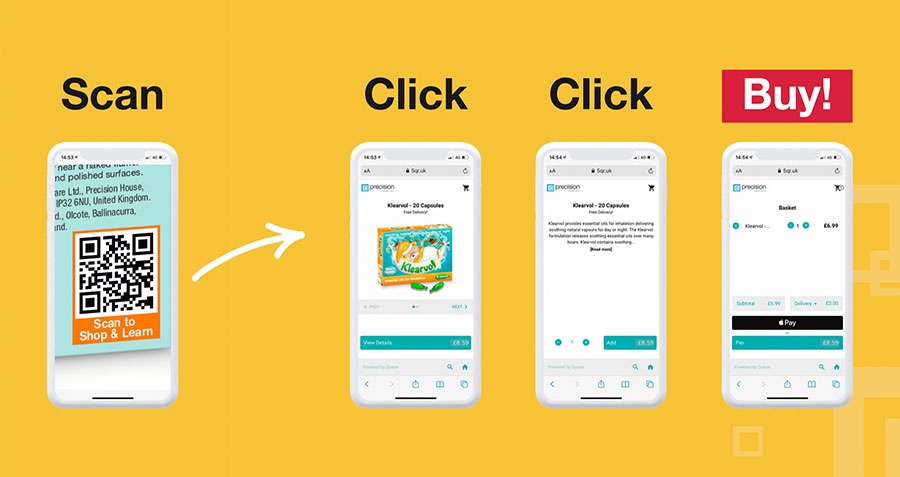 But what if you’re looking to sell a pharmacy sale product? At the very least, you’d need to ask your consumers relevant questions prior to their purchase, and maybe, connect them to a pharmacist for further clarification. These are also features that a good web development team could create for you including Precision Queue, and although you might be adding an extra ‘click’ to the process, it’s a minor step in an already minor time frame!

Finally, the stuff behind the scenes! You might be thinking about how to get the product to the consumer, which is a great point to think about! Fulfilment is just as important to the process as ordering, and consistent, timely delivery makes click click buy all the more appealing. It’s a long conversation to be had as it differs for every product, but depending on your product, it’s a conversation Precision are more than willing to discuss. Just reach out!