Postcards from the Edge

Why it is far from crazy, to invest in data driven smart marketing at time of crisis. Even if your first instinct is to cut your marketing spend. In fact, it is essential to do so to enable all businesses to recover from a prolonged period of recession!

A large proportion of what Precision do as a business is to send digitally printed, variable data postcards to win new customers for our clients. When writing this piece, something trigged in my memory about the title of the movie for whose book and screen play was written by the late, great, Carrie Fisher; Postcards from the Edge. I then Googled the definition:

“Falling (or jumping) off means a disastrous descent into craziness or addiction. The idea of sending postcards in such a desperate situation has some humour to it. So, postcards from the edge are, roughly, messages from one who is half crazy but not so crazy as to have stopped wanting to communicate with people.”

The film came out in 1990. (Yes, I know, many of you wouldn’t have been born but stick with me as it makes a good metaphor.) Four years before the much derided QR code came to our attention, as with all good screen plays, more about the QR code later.

Postcards, used as adverts, belong to the most influential, most impactful and most read forms of advertising families available. Beating e-mail, PPC, OOH. (I could continue abbreviating but attention spans are such and I am sure you get the picture). The issue with postcards and all forms of direct mail. Is that it takes a lot of effort to create a campaign. It is expensive to print and post and it is difficult to measure engagement and therefore the return on investment is less than scientific. Until now!

The digitisation of traditional industries has played a huge part in their ability to compete against the competition. Obviously, the internet makes this so much more achievable. By linking customers together, irrespective of where they are in the world, but another key factor is automation.

Having the ability to send portable files and merge variable data and to flow that coupled file seamlessly. Using an automated workflow process to a digital printing press and onto Royal Mail. This enables us to take significant cost out of the process.

Precision Connects™ provides the online data and publishing hub. That provides users with the marketing tools to place a direct mail campaign in the time it takes to place an e-mail or PPC campaign and at a greatly reduced cost.

In addition, Precision ConnectsTM provides the user with the best possible postal discounts based on the specification and quantity ordered. To top it all, it is free to use, with no minimum order quantity.

Quick Response codes are making a comeback. Finally finding a place in bridging the gap between the physical and the digital. Recently we have seen some fabulous articles in Campaign and MarketReach that highlight the importance of the humble QR code. In the midst of a pandemic where we have to live in a “no touch” world.

QR codes are now in use every day and therefore, a prospective customer would scan a QR code on sight and not give it a second thought. Especially if there is value in doing so, a gift, a discount code etc.

Precision Connects™ now has the ability to create customer unique QR codes. These can be linked to any digital journey you wish to take them on. By creating a “hyperlink” to your web site, video, landing page, discount code, virtual tour or any other URL, we can monitor not only the engagement/redemption taking place, but also which address took part. This is made possible through the use of Chili Publisher, the universal graphics engine that sits at the heart of the Precision Connects™, web to mail platform.

By applying data driven digital technologies, we at Precision have made the Postcard (and any other type of printed collateral) a key part of our customers armoury in the battle to win new business and fight their way out of recession. The doorstep has become the new frontier for advertising to sit alongside the now traditional digital channels.

If you feel that you need to create some cut through to a new audience, scan me. 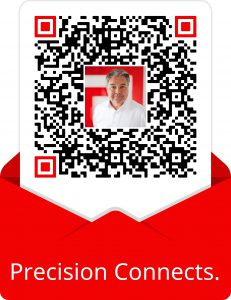