Applying sustainable direct mailing practices to Cambridge University’s alumni magazine, with a circulation of over 200,000.

With a large circulation for its alumni magazine. The University of Cambridge was on a mission to remove the layers of polythene film from its mail fulfilment. Although effective for the secure transit of their direct mailing campaigns. It did not provide a sustainable solution for their three times per year direct mail activity.

When esteemed academics move onto pastures new following graduation. There are many benefits for a university to stay in touch: encouraging loyalty even after graduates have obtained a degree, circulating important university-related news, and requesting support for fundraising.

Finding a direct mail communication partner for a high profile university alumni mailing is critical to the success of the campaign for several reasons:

Precision’s carbon neutral, sustainable print and mail fulfilment service is ideal for the completion of alumni mailings. It utilises a compostable eco-mailing film. By implementing this sustainable practice, we provided the University of Cambridge with an eco-friendly alternative to package their CAM magazine, which is posted to their alumni three times per year.

Paper envelopes were not a realistic option for this campaign due to the thickness of the contents; in addition, the university was keen to use a clear mailing wrap. Therefore, Precision floated the idea of a new potato starch mailing film to the University, offering a solution that would tick all the boxes – a compostable eco-mailing film that still retained transparency.

When King Edward VII’s name was given to a new variety of the humble potato, no one could have guessed - including this former royal student himself - that just over a century later, potato starch would play a part in his university’s sustainability strategy.

Fast forward to the 21st century and the potato, or rather its waste, has provided an eco-friendly solution to help organisations chip away at their plastic footprint.

To test the sustainability of potato starch film and to ensure it wasn’t just a ‘half-baked’ idea, Simon Frost (Production Manager at Precision), trialled the decomposition of the potato starch film in an ordinary garden compost bin.

Being a carbon neutral business, it was critical to Precision that this new eco-wrap fully composted within days. We filmed the process for visual proof and it exceeded our expectations: full decomposition took place in under 10 days! Potato starch mailing film has now been adopted as our default material for wrapped sustainable direct mailing campaigns.

In addition to alumni mailings, Precision also specialise in the sustainable print and mail of faculty newsletters and student recruitment campaigns. The latter is essential in assuring potential enrollees of a university’s commitment to sustainability; In today’s social climate, a simple ‘sustainable practices’ memo displayed on a website homepage is not enough. When it comes to the environment, the public want to see that an establishment is following through with its promises.

Our comprehensive sustainable direct mailing service enables universities to be proactive and prove that they are committed to their word, by replacing old practices with ones that are environmentally conscious.

Dr Chetan Narshi @rheumi_ ...
“Great to see that my alumni magazine from @Cambridge_Uni arrived in a compostable cover. #nomoreplastic #savetheplanet” 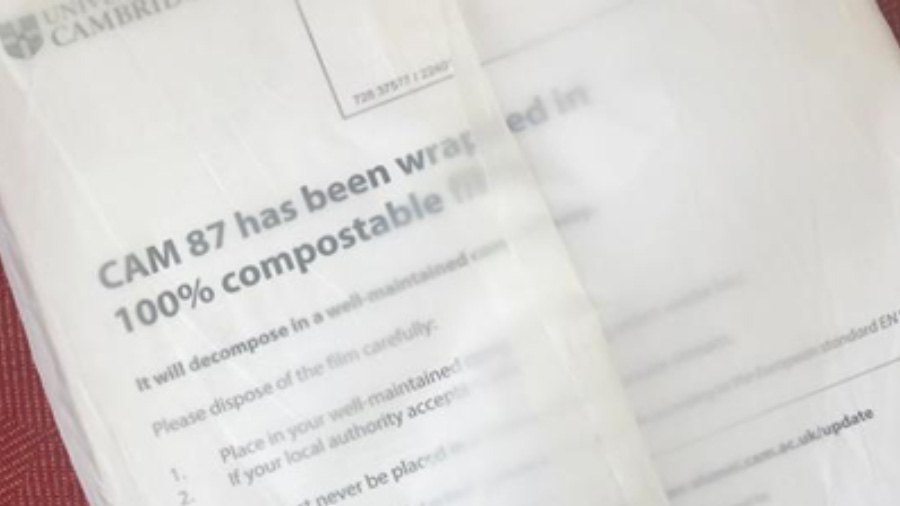 Switching our alumni direct mailings from traditional polythene has the potential of removing 3.75 tonnes from landfill per annum and complements the University of Cambridge’s Environmental Sustainability Vision.

- A spokesperson from the University of Cambridge.